In a former mill building sits Joinery – a field-to-table restaurant that serves dishes inspired by the southern upbringing of owner-chef Brendan Vesey.
“We take the old recipes of the South and try to stay true to their spirit without being bound,” he said.
The menu changes with the seasons. Recent entrees included a pork duo of crispy bellies and grilled loin with South Carolina BBQ, and grilled sweet potatoes, buckwheat gnocchi, fried fish and grits. Of course, there is fried chicken with cornbread, hot honey, cucumbers and kimchi potatoes, fried green tomatoes, braised collard greens, cornbread and biscuits with gravy.
The restaurant’s slogan is “handmade goodness” and who could argue? The maple donuts served at Sunday brunch are the best donuts we’ve had anywhere – ever. Crispy outside but with a thin glaze of local maple syrup. Literally worth the trip to Newmarket in and of itself.
The restaurant is in a granite-constructed, 19th century textile mill that once housed the Newmarket Manufacturing Company and later was home of the Timberland Company. The building now houses several businesses on the ground floor and apartments above, which have led to the reinvigoration of the faded mill town on the Lamprey River.
Above the tables are massive wooden beams connected with mortise and tenon joins that gave the restaurant its name. “We took huge notched beams from a 1600s-era barn in Maine,” Vesey said, “and the name ‘Joinery’ seemed to be a good fit.” 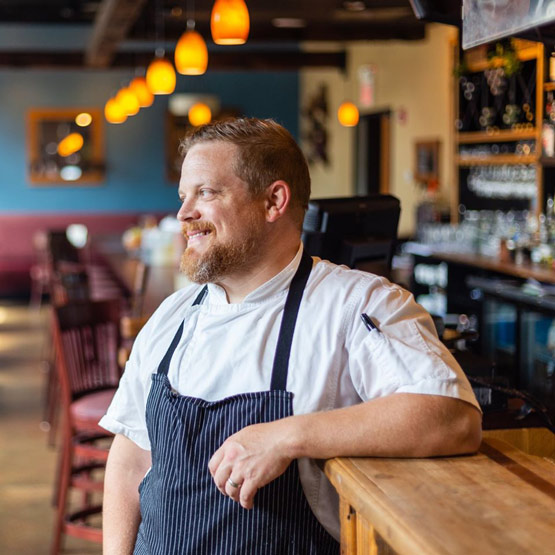 Some counter seating and an open kitchen make the food’s preparation part of the entertainment. Vesey, who also owns and operates Botanica Bistro and Gin Bar in Portsmouth, was raised in Virginia where he first learned cooking from his family.
“We all cooked at home,” he said. During high school he got a dishwashing job but said he gravitated toward cooking because he had an affinity for it. And while a student at the University of Virginia, he got a job with a catering company. “I started as a waiter, but the chef called me into the kitchen. He was super talented, and one thing led to another.”
Vesey was a member of Navy ROTC, as well, at the university. After graduation, he served as a surface warfare officer in the Navy aboard the aircraft carrier Theodore Roosevelt before embarking on his culinary career.
“I then entered a rigorous program of self-study of cooking,” he said, noting that he was chef at Victory and Street in Portsmouth before opening Joinery about six years ago.
“We do farm to table depending on budget and availability,” he said. “That means we serve beets and hearty greens in the winter, and we won’t serve tomatoes until we can get them locally, but, at the same time, we have to offer what our customers are asking for.
“We do serve some farm-raised salmon, high end from Scotland, but that’s because our customers demanded it,” Vesey said.
On occasion, he has served dishes made with green crab, an invasive species that is devastating to local crustaceans and bivalves.
“They are rock hard and don’t have a lot of meat, but they make a great broth that we have used in bisques and paella,” he said. “I feel strongly about sustainability.” 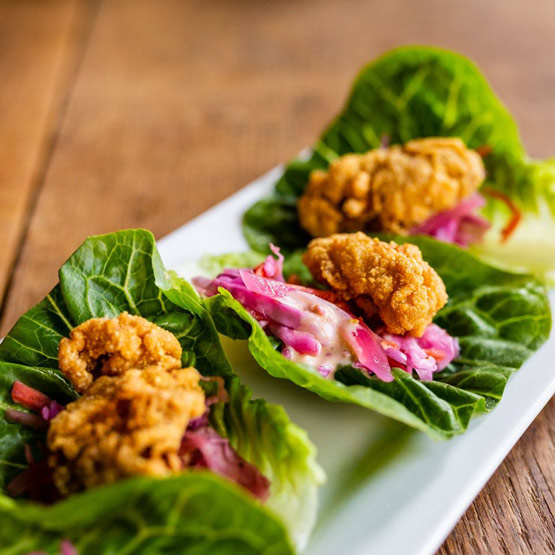 Vesey is a local leader of the Chefs Collaborative, a national group of chefs and other food professionals who have banded together to promote a better food system that emphasizes fresh ingredients and sustainability.
He is also an advocate for local farmers, fishermen and fresh foods. He has participated in the annual Portsmouth Know Fish Dinner, sponsored by the One Fish Foundation, which celebrates seafood sustainability and highlights the work of local fishermen and women. As a member of the Heirloom Harvest Project, which seeks to raise awareness of heirloom produce and heritage meats, he has participated in the fall barn dinner and summer “farmecue” at a local spread. And he has prepared meals for students as part of the chefs-to-school program in the Kittery Public Schools in Maine.
Vesey loves the open kitchen at Joinery.
“It was created by necessity,” he said. “The space used to be a butcher shop with two refrigerated cases, so we decided to roll with it. There is very little barrier between diners and the staff. The kitchen is the first thing diners see when they come in, and we can talk to them directly. People come by after their meals to say, ‘thank you.’ We get a lot of great guest interaction.”

So Many Books, So Little Time