Alphabet Book: Nashua in the Spotlight

How do we keep our community arts and artists supported and viable through these tough times?
We suggest ordering a treasure of an alphabet book called “N is for Nashua: A Children’s Alphabet and Art Book,” a community effort to support Symphony NH. Not only do the proceeds support the symphony, which, like other performing arts groups, face special challenges in this time, but it also celebrates the work of local artists and writers.
The children’s book is not brand new. The first edition was released a while back but was intended to exist as an ongoing fundraiser to last for years. Its importance is worth a visit or revisit and is still on sale at the Symphony’s site and local stores, including Fortin Gage in Nashua.
It’s a great way to support music, encourage children reading about local history and expose them to the work of New Hampshire painters and photographers. And in these times, a visual reminder of what a community can produce when it pitches in together.
In all, 27 local artists, 21 writers and 28 sponsors in the form of individuals, families, businesses and non-profits, pitched in to create the publication; it starts with “A is for Acting” through “Z is for Zamboni.” Each page has its own illustration, painting or photograph to illustrate the letter that refers to something specifically Nashua.
We learn that “H is for Holman Stadium” – “built in 1937 with a donation from Charles Frank Holman to honor his parents. The stadium has been home to football, baseball, concerts, graduations and spectacular July 4th fireworks.”
Nashua artist Peter Houde illustrates the page with an expressionistic figurative depiction of the stadium that saw what is believed to be the first stadium in the country to host a racially integrated team in modern baseball history. That was in the mid-1940s when Holman was the home of the farm team for the Brooklyn Dodgers, which included in its ranks Roy Campanella and Don Newcombe. 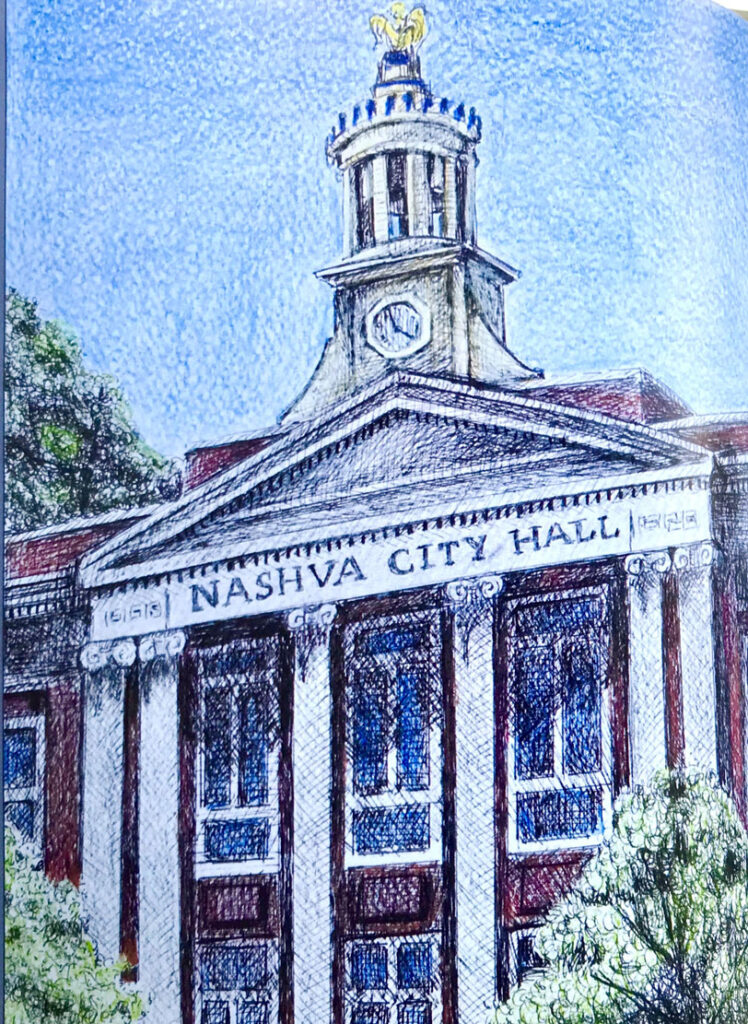 Nashua City Hall is depicted in “C if for City Hall.”
Illustration by Marcia Gardner.

The city’s industrial past is depicted in Hollis watercolorist and silk painter Ellen Davison’s spectacular industrial skyline for “M is for Mills.” The text beneath explains the mills “were factories in Nashua where workers made fabric. Many Nashuans worked in the mills, which were the biggest businesses in the city. The Nashua mills were built near rivers or man-made canals so they could use water to power their machinery.”
And professional photographers, like Nashua native Dan Splaine, who captured the image of the John F. Kennedy bust in front of Nashua City Hall, also contributed to the book. The bust marks the spot where on Jan. 25, 1960, Kennedy made his first presidential campaign stop.
But it wasn’t just local artists and businesses who pitched in for this project – the text for the book was contributed to by Nashua residents, including elementary school students, those learning English as second language at the Adult Learning Center and even the mayor at the time.
The proceeds from the book go to underwrite the concerts and educational programs at Symphony NH.

Painting Outside the Lines