Organic pork is not the other white meat.
“Ours is red, not white,” said Craig Thompson, who raises organic hogs at Mayfair Farm in Harrisville. “There’s a little more fat and a little more color.”
Mayfair pigs have year-round access to the outdoors and enjoy warm weather pastured in woodlands where they forage, romp and “act like pigs,” according to Thompson. And they are not given antibiotics.
“Most of us know by now we shouldn’t overuse antibiotics, so we don’t end up with bacterial infections that drugs can’t treat,” said Leslie Stahl on a recent episode of the investigative TV show 60 Minutes. But it’s interesting to note that more than 12 million pounds of medically important antibiotics sold in this country are not for use in humans – they’re for livestock. And the antibiotics are driving the spread of drug-resistant bacteria in the animals that can get passed on to us through food, if we don’t cook and handle it properly.
According to Jean Halloran, director of food policy initiatives at Consumers Union, the advocacy division of Consumer Reports, “some 80 percent of all antibiotics sold in the U.S. are given to animals – not people – in their feed or water, mostly to promote growth and/or prevent disease … and that’s a major contributor to the public health threat of biotic resistance, which is when the bacteria that cause infections become resistant to the effects of the drugs designed to kill them.” 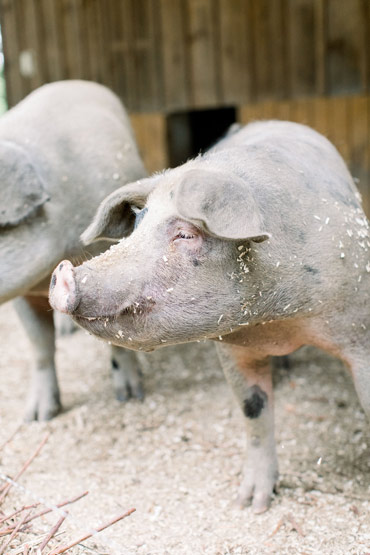 Hogs raised on antibiotics do not produce your grandfather’s pork chops.
Decades ago, most commercial producers reacted to consumer demand and began raising lower-fat pork, which the National Pork Board branded as “the other white meat.”
“What started as a PR campaign for pork resulted in bland, unforgiving meat that, upon cooking, doesn’t render enough fat to keep a layer of lipids in the pan,” according to a report by Modern Farmer. “We engineered pigs for consumers who wanted leaner meat, and now we have a tasteless product that many don’t want to buy.”
“Fifty years later, we began to rethink our ways, and a handful of producers are trying to breed the kind of pigs that provide the kind of pork that only the taste buds of the oldest Americans have experienced, but there’s no simple solution.” the report said. “Not only has the way pork tastes changed radically, the way it is raised has as well. Going back isn’t as simple as flinging the barn door open.”
But that’s exactly what Thompson has done at Mayfair.
“We raise a variety of pigs – Gloucester Old Spots and Chesters, which do well outside where they rummage around and eat acorns and other forage,” he said.
Mayfair’s herd includes between 150 to 175 hogs.
“They live in a low-stress environment, so they are less susceptible to diseases, unlike commercial enterprises in Iowa, even Pennsylvania and New York that have thousands of animals,” Thompson said. “But I won’t criticize them. It’s hard enough making a living as a farmer.”

Mayfair’s pork is rated Step Level IV by the Global Animal Partnership, an international nonprofit committed to improving the lives of farm animals.
“We’re one of only two farms in the country with that high rating,” Thompson said. “I think our methods would be familiar to any farmer from the ‘30s and ‘40s. My grandfather began farming in 1910, and I’d like to think he’d feel right at home here.”
Whole Foods has been sell

ing Mayfair’s pork for several years. “They have been a really good partner for us.” 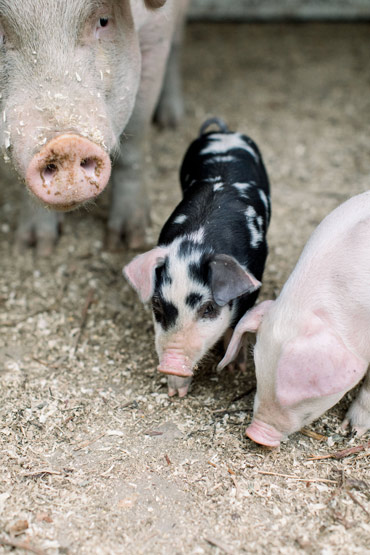 Mayfair is not the only farm in New Hampshire that prides itself on producing local, organic pork.
Steve Normanton Farms in Litchfield has pasture-raised pork. According to its website, the animals “live completely different lives from the nightmarish conditions of the modern industrial pig farm. Our pigs live, eat and play outdoors (with shelter from the sun and weather). We keep them close by the perimeter fence, where they munch on roots and acorns, as well as the certified organic pig feed we give them. We move them along the fence line, and they keep it clear of weeds and brush, eliminating the need for a weed whacker. As with all of our livestock, we never feed them added hormones or antibiotics.”
At Brookford Farms in Canterbury, pigs live a healthy life and help the environment. According to its owners, the pigs “slurp up all of the whey our creamery produces and munch on lots of organic vegetables deemed too damaged by pests or disease, as is inevitable in organic production. One of their most important jobs is to convert woodland into new fields and pastures. With their snouts, the pigs root in the dirt and turn the soil over … no plowing needed! Most of the farm soil is light and sandy. So, the pigs are a great tool for building up good humus and enriching the soil.”
Piggies at Templeton Family Organics in Goffstown also eat locally sourced food. They love Stoneyfield Farm yogurt as well as Green Mountain feed. They also stay outside year-round and are always moved to fresh pastures.
At Paradise Farm in Lyndeborough, heritage-bred pigs are raised on non-GMO grain, the farm’s own apples, fruit, berries and organic dairy products, which, together, produce tasty, healthy, hormone-free, antibiotic- and nitrate-free pork.
It’s a pig’s life at Archway Farms in Keene – a “farrow-to-finish” operation – where a mix of heritage pigs bred to thrive outside are born and humanely raised on site. “Out in the woods and pastures, the pigs find loads of roots, acorns, bugs and whatever else Mother Nature offers them,” according to Archway’s website. “We supplement their diet with non-GMO grains and minerals, as well as any scraps from the farm. After all the crops have been harvested from a field, we use the hogs to glean whatever the vegetable crew left behind. Waste not, want not.” The website goes on to say, “We believe healthy, active pigs are happy pigs, and produce better quality pork. During the warmer months, all of our pigs are outside on pasture and are moved regularly, so they have access to actual green growing vegetation. During the cool, wet months, they are off pasture to protect our fields, with a deep-bedded shelter and an outside loafing area.”