Can a motor vehicle be a local hero? Probably not, particularly if the vehicle was made in Great Britain, but its owner may be if he or she is a member of British Cars of New Hampshire, which has an annual Show of Dreams that benefits local charities.
This year’s show will be held July 27 at Alvirne Hills House in Hudson where anywhere from 200 to 250 MGs, Aston Martins, Jaguars and other British sports cars dating from the early 1930s to the present will be on display.
“We all love our vehicles and what they stand for – they were among the first sports cars — but the most important thing is to raise money for charity,” said Diana Stanley, a member of the British Cars of New Hampshire, which organizes the event to benefit the High Hopes Foundation of New Hampshire and the New Hampshire Food Bank as it has for the past 22 years.
This year’s event features a range of classic Jaguars made for “grace, space and pace,” according to the company slogan. That includes the XK120 manufactured from 1948-1954, the XK140 made in 1954-1957 and the XK150 from 1957-1961, among others, as well as a squadron of other vintage and contemporary autos known for their fine styling.
The vehicles will be competing for prizes in a number of categories and, for the first time, a kids’ choice award which will be voted on by the youngsters who attend the show.
There will also be an exhibit and sale by local crafters as well as auto-themed vendors including Brit Bits, an English sports car restoration company in Rye; the Good News Garage, which provides donated cars to the needy; and Over the Top Shelters, which sells storage units for cars, motorcycles and other items.
There will be a representative of the Honor Flight New England, which provides transportation for World War II and Korean War vets to visit the war monuments in Washington, D.C. This year’s tent is expected to have on-hand a local hero of another kind: Ella Stanley, age 95, a member of the group, who served as a nurse in the Navy during World War II. 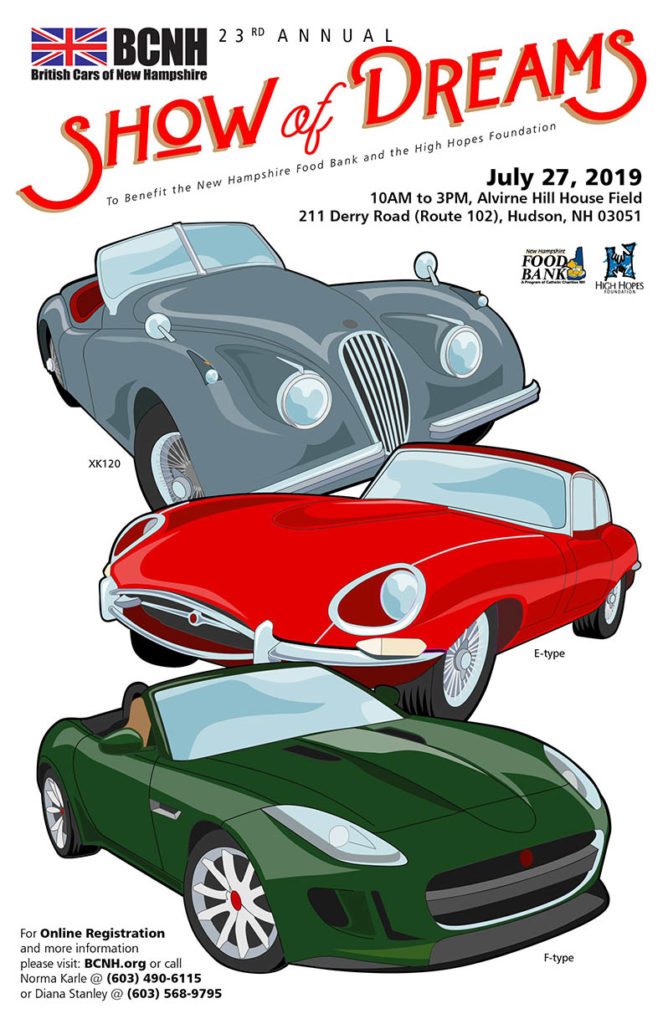 The show offers a rare chance to see the cars when they are not in motion.
“We are a driver’s club. Every weekend there are three or four events going on all over the state and throughout New England that we participate in,” said Stewart, who owns a 1969 Triumph GT 6, a 1975 Triumph Tr6, a 1980 Tr8 and a 1983 Jaguar XJ.
And what is so special about British sports cars?
“They are quirky and fun — the original sports car — many were brought back by our soldiers after World War II,” said Stanley
And why have an auto show?
“We all love our cars and want to show them off, but the most important thing is raising money for charity,” Stanley said.
The organization has raised more than $100,000 for High Hopes and the NH Food Bank combined since it began in 1997, as well as contributing funds for Boston Children’s Hospital.
High Hopes, whose slogan is “Make Hope Happen,” is a 36-year-old New Hampshire-only charity founded by two local moms. Its mission is to provide life-enhancing experiences to New Hampshire’s chronically ill children.
The New Hampshire Food Bank, a program of Catholic Charities of New Hampshire based in Manchester, has distributed more than 14.1 million pounds of food and 11,923,938 meals to the food insecure through nonprofit food agencies throughout the state.