Watercolor artist Stephanie Tickner takes her inspiration and pleasure in the everyday moments of a simple life in New England — a butterfly on a flower, a row of colorful buoys hanging by the ocean, small children digging on a sandy beach.
There’s no pretentiousness in her artwork, no over-inflated sense of ego or grandiosity. A quote by L.M. Montgomery describes her viewpoint and leads her website’s home page beneath a painting of two children poking sticks into a small stream: “It has always seemed to me, ever since early childhood, amid all the commonplaces of life, I was very near to a kingdom of ideal beauty. Between it and me hung only a thin veil. I could never draw it quite aside, but sometimes a wind fluttered it and I caught a glimpse of the enchanting realms beyond — only a glimpse — but those glimpses have always made life worthwhile.”
She grew up in Falmouth, Mass., and says she could be found always drawing as a small child, copying pictures out of books. Later, at age 16, her grandparents paid for her to take a community drawing class, which pushed her beyond the basics of sketching and taught her additional techniques. 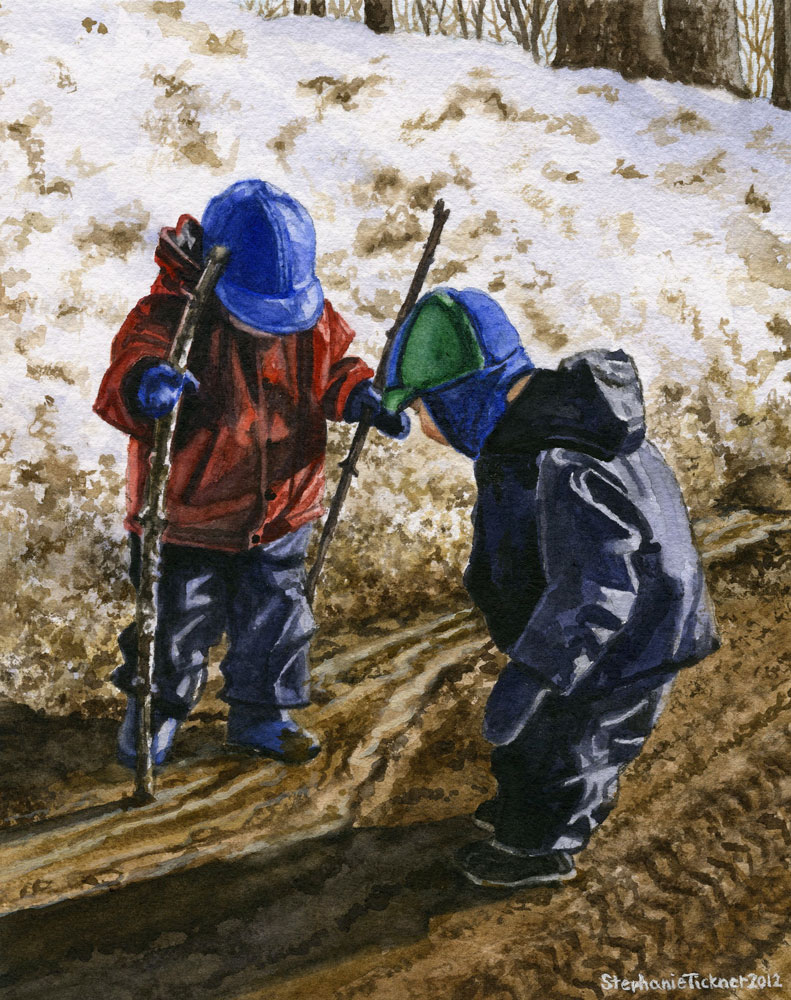 Majoring in Spanish at Keene State College, she and her husband were married three weeks after graduation. They moved to the nearby town of Marlow in 1990 where they appreciated the feeling of space that could be found at their home on the backside of a hill in a small town of only about 750 residents. Now empty-nesters, they have two adult children, a son and daughter, ages 19 and 21.
Tickner recently celebrated her 20-year anniversary as an employee of Antioch University New England in Keene where she is an administrative coordinator in the department of management. Her artwork has appeared in several of the university’s brochures and catalogs and even a greeting card. Living local and supporting the small-town economy is a huge part of life at Antioch, she says, which even offers an MBA in sustainability.
She is self-taught, she said, and learned through reading and studying other artists’ books on style and technique. But mostly she learned through a lot of practice. As an adult, she moved back into art with pencil and charcoal, but now she mainly works in watercolors, preferring that medium over the others she has tried — and the fact that is doesn’t smell as bad as oil and is easier to clean.
Of her painting process she says, “My painting is an ever-evolving process, and along with many successes, I have failures as well. I just keep trying.”
She has also worked in acrylic when painting on wood, and in 2008 she was asked to paint a mural inside at John D. Perkins Sr. Academy elementary school of an iconic town scene of three churches next to the water of the village pond.
“It was scary,” she said of the process. “I was learning on the wall.” 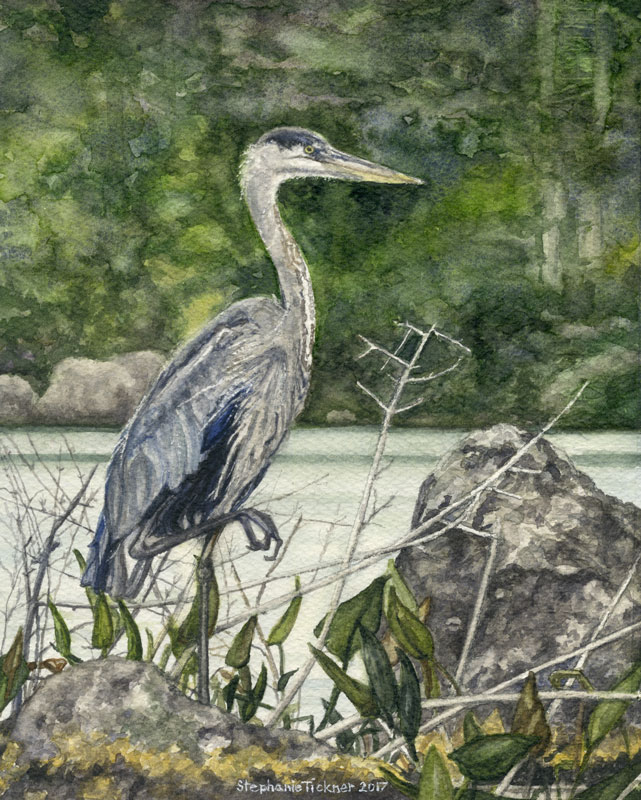 She paints on commission and generally works from photographs. Her subject matters run the gamut from people and pets, to buildings and landscapes. The painting of Toby on this issue’s cover was a commissioned work.
She is inspired by the natural world around her and capturing moments of people in everyday life. Varying the subject matter of her art keeps her interested, and she says she wouldn’t want to paint the same thing over and over. She travels with a camera in hand and takes many photos in her travels to draw from when she needs inspiration.
She has won multiple juried art awards for her pieces, and in 2012, she took home a Best in Show and People’s Choice Award for her painting, “There It Goes,” of two children playing with sticks in the mud for a Glamour in Mud Season art exhibit in Wolfeboro. Glamour in Mud Season is an organization that celebrates the creative, clever and quirky ways New Englanders make the 5th season — mud season — fun.
A member of the Monadnock Area Artists Association, Tickner has participated since 2004 in the association’s annual Art in the Park at Ashuelot River Park in Keene that is held over Labor Day weekend as well as the Keene Art Walk in June. She is also a member of the Marlow Art Colony, which has not been active for a few years, but members still gather to paint on occasion.
Tickner has been part of numerous group and solo exhibits over the years at various exhibit spaces in Keene and the Cheshire County area. She is active at area crafts shows throughout the holiday season, selling her original art, as well as prints, cards, magnets and bookmarks.
But, for now, there are no exhibits pending, and she plans to spend much of the cold winter holed up in her studio painting, as many artists do in the off-season. Life in southwestern New Hampshire slows down quite a bit this time of year.
It’s the perfect opportunity to focus her attention on “the little things that make life special.”

Try a B&B for some Staycation R&R