Artist’s Work Connects the Very Big to the Very Small

Her art tells a story of the universe and the universe within. A child of two NASA scientists, Greenland resident Wo (pronounced woe) Schiffman has always found herself inspired by the makeup of galaxies, a composition she can often see duplicated at a cellular level in the materials she uses to create her artwork.
Schiffman is an encaustic painter, meaning she uses heated beeswax, tree resin (also called demar) and natural pigments to paint or print on porous surfaces, such as paper, stone and wood. An ancient practice, encaustic painting is believed to date back more than 2,000 years and was used by the Egyptians in their temple paintings and in the ceramics of the Greeks and Romans. It may even have early roots in a different format in Asia.
As a child, she went on summer digs for fossils with her family and helped organize the objects, creating a lifelong love for nature. Her mom, a geoche 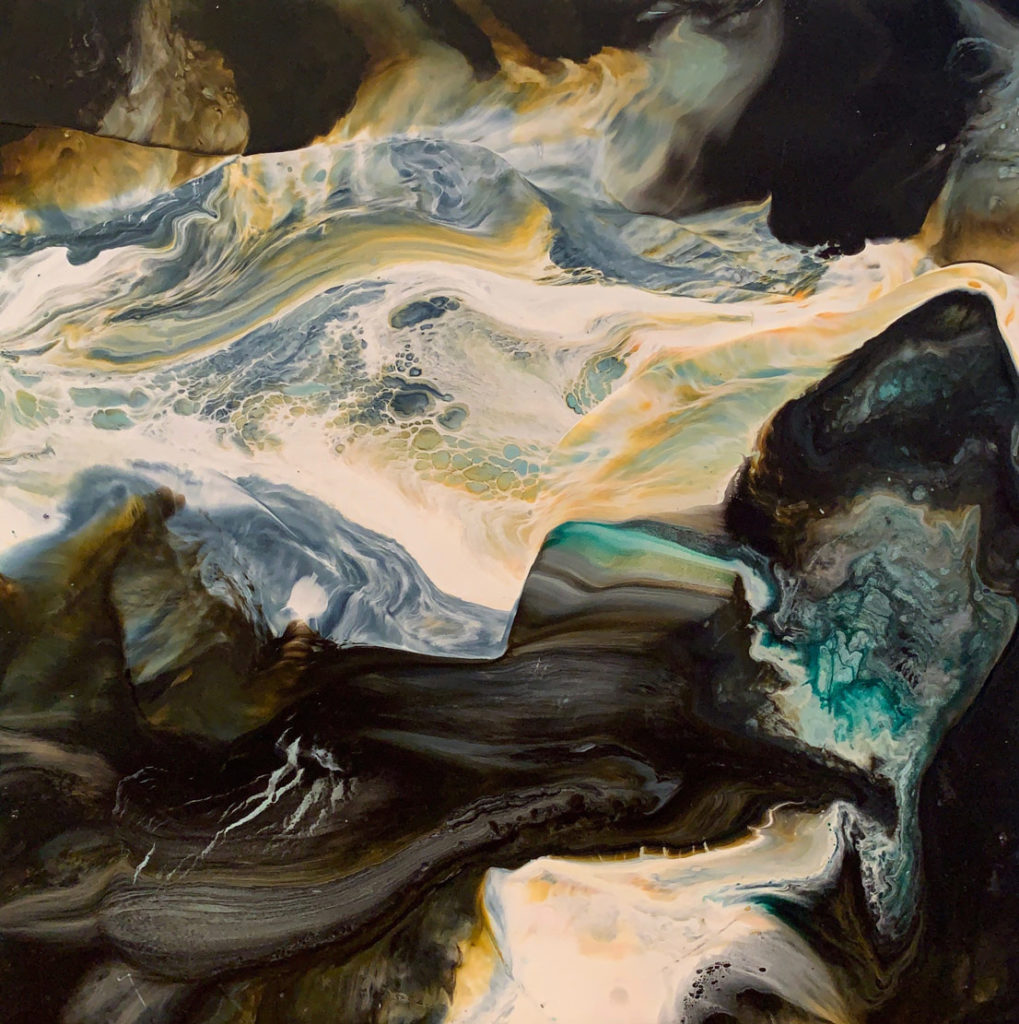 mist, encouraged her to look at the Earth and ask, “How were these mountains formed?” Schiffman’s “Traces” collection is the examination of fossils with the parts magnified and painted on colored surfaces.
Her father was from the Netherlands, so they traveled overseas throughout her life, and she studied encaustic painting in Europe. She started encaustic work in the late ‘60s in Denmark, where she lived for five years studying art (she also studied in Japan and New Zealand), learning from an artist who studied in Germany. After a long break to focus on textiles and other art mediums, she returned to encaustics several years ago.
Through her parents’ occupations, she was exposed to the 1950s and ‘60s projects done by NASA, fostering an affection for telescopes and satellites and what could be seen with them, the “new landscapes” of the sky, planets and stars, natural compounds formed by heat and ice.
The appeal of her work, she said, is that it looks at nature as something we are all a part of.
“These are the forms and landscapes that inspired me,” she said. “My aha moment was watching myself be a participant in a process that mimicked something big. You can choose to be one of the materials in the journey or you can forever be ‘the other.’”
And in that is the crux of her creative process: an ongoing observation and artistic interpretation of the nano – the microscopic – as well as outer space – the macroscopic world. She plays with scale constantly, reducing such vast images to a panel that will hang on a wall or taking the subcellular and magnifying it to the same scale, something she describes as “sitting inside the spectrum of nature.”
She has two studios – “the really messy one,” as she joked, where she makes all her encaustic materials, grinding the pigments she creates herself from natural materials, such as dried walnuts and onion skins, and a second studio in Exeter, above Blue Moon Evolution, where she hosts open studios.
Another appeal of working with encaustics, she said, is that it’s a no-waste medium. It heats up for use and then hardens when it cools back down, enabling it to be used again. Schiffman said it reminds her of experiences camping and the philosophy of leaving nothing but footprints behind. 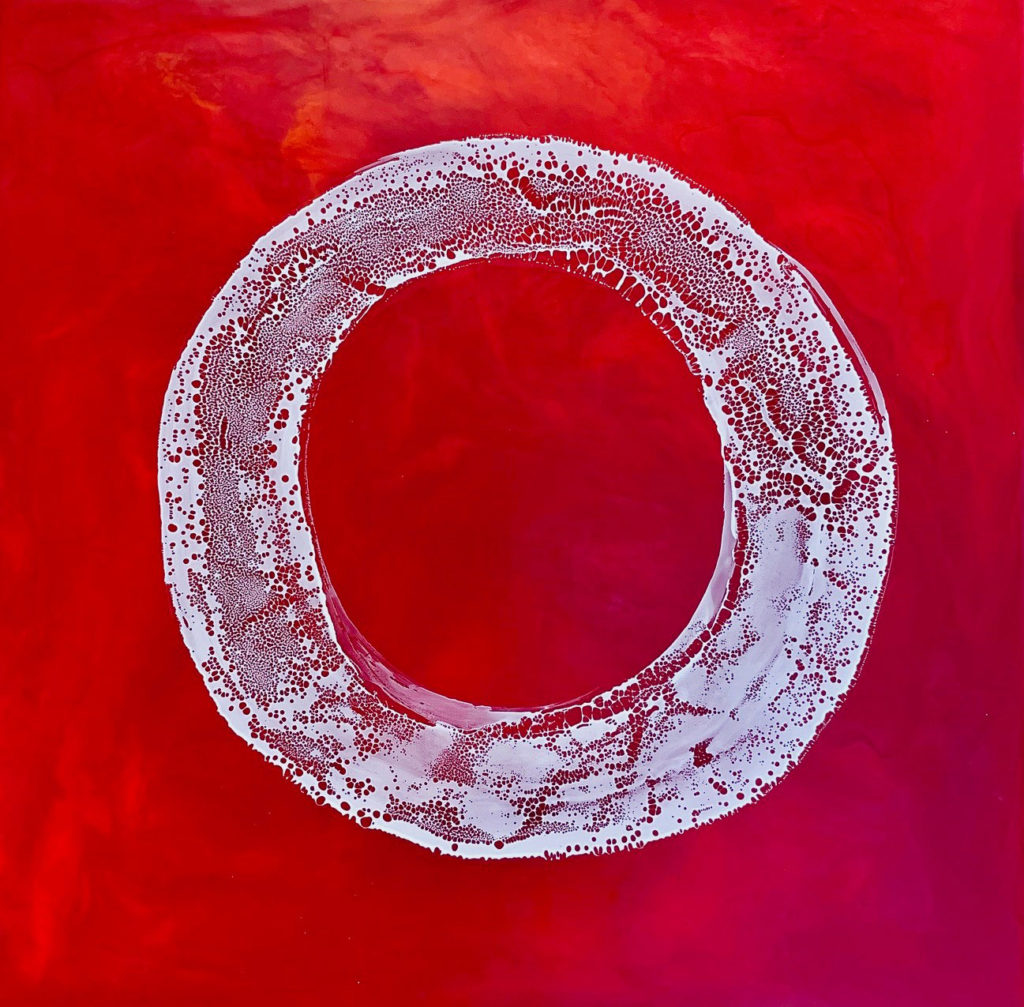 A member of the Seacoast Artist Association, her work is on exhibit at the association’s gallery and in the permanent collections of several museums – the New York Hall of Science Museum, the Hosby Konsthall and the Museum of Encaustic Art, to name a few – and she has exhibited in the U.S., Scandinavia, and Asia.
She is part of an international encaustic exhibit, “The Lands We Love,” which opens in Freemantle, Australia, for November and December. Schiffman’s pieces in the series depict several of the U.S. National Parks. A community art show at Exeter Town Hall that opens Nov. 1 will also include Schiffman’s pieces from that series.
Her two-woman monotype show, “Conversations in Color,” will open at Blue Moon Evolution in Exeter in December, with a reception Dec. 15. Both artists use monotype – Schiffman in wax and encaustic and Annick Bouvron-Gromek in ink and pigment – to communicate a nonverbal dialogue of color.
“These types of conversations go beyond the way we understand art,” Schiffman explained. “They go below to the universal color and feeling. It’s like playing jazz between artists.”
She divides her time between Exeter and New York City, where she is also working with a well-known artist on a similar but larger 30-plus piece collection that communicates back and forth nonverbally and migrates through the entire color wheel. She is also consulting with community partners at a cooperative gallery there on outreach efforts to bring more New York City artists to New Hampshire galleries and vice versa.
She’s married to “the love of my life,” Barry, a Stanford alum now retired from the tech world, and they have two rescue dogs, a border collie Maddy and Durham, a retriever trained as a guide dog for the blind. A blended family, between them they have four adult children and five grandchildren.
They lived in the Bay area of California for 35 years before returning to retire in New Hampshire where Schiffman ran a communal art studio and two galleries. They were also sailors, building and racing sailboats on the Pacific Coast in blue water races that lasted up to 20 days, even racing from San Francisco to Hawaii on a Santa Cruz 52 – a sleek racing yacht. These days, they get their water fix a little more inland at house they own on a pond in Center Barnstead.
Schiffman has many positive comments to make about the lively art scene happening in the Seacoast region of New Hampshire. The Seacoast Artist Association, she says, is a nonprofit that makes valuable contributions to the community in the form of scholarships for students and other support.
“We need to keep supporting our local folks – the food growers and the artists,” she said. “We all have contact with things imagined and created by people in our region.”
For more information and to view more of Schiffman’s work, visit waterstoneart.com or woschiffman.com. To make an appointment to visit Waterstone Art Studio, contact Schiffman at woizme@me.com or 770-6982.