Tim Campbell is as quirky, authentic and straightforward as his paintings, rendered in a style he calls “primitive-funny.”
“I’m not a big fan of artists, with a capital A,” he said. (The people who say they paint only for the love of their art.) “That’s a crock. It’s a job. Farmers want to sell their crops. Artists want to sell their work.”
Campbell, 57, a lifelong resident of Keene, was influenced by 18th and 19th century itinerant artists who were mostly self-taught and traveled from town to town painting primitive-style portraits in exchange for money and sometimes room and board.
Similar to those artists, Campbell is also self-taught. He won a school district art competition when he was in second grade and has kept going ever since.
“I don’t remember what I made to win that contest,” he said. “But I do remember that my award was a bunch of books. I still have the ‘Winnie the Pooh’ and ‘Sammy the Seal.’”
Campbell is fond of and inspired by old things. He has a house full of vintage tchotchkes and loves to transform found objects into objects d’art, like an “asparagus chair,” which has a plain wooden seat with spindles that have been turned into tromp l’oeil asparagus spears. Also, a set of four wooden “Founding Father Finials” – George Washington, John Adams, Thomas Jefferson and Ben Franklin. All of his sculptural pieces are fashioned from recycled wood and metal.
“I go to antique and second-hand stores to see what jumps out at me,” he said. “I’ll use anything: broken furniture, a piece of wood – as long as it doesn’t stink.” 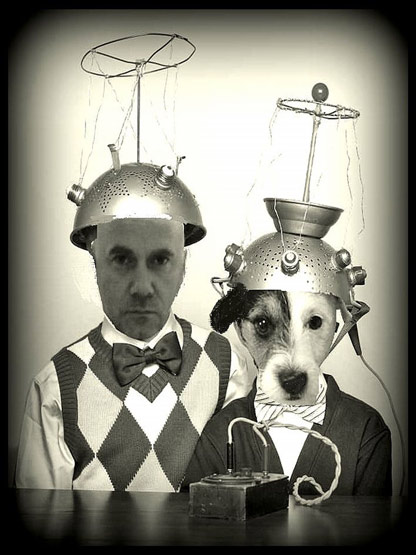 Campbell’s paintings are also a cunning and captivating amalgam of tradition and whimsy – familiar and traditional in their flat, linear style but also contemporary and slyly funny.
His favorite artists are Pablo Picasso and Edward Hopper – a Cubist and realist. Pretty far away from his own aesthetic, but definitely evident in the geometric shapes in his portraits a la Picasso and the deep, dark saturated palate of Hopper. His work, which has been on the “best” list in Early American Life magazine, is in galleries throughout New England, Cape Cod, Atlanta, San Francisco, in the American Folk Art Gallery in New York City and in private collections throughout the United States and Europe. He is listed in the Directory

of Traditional American Crafts as well.
In Keene, Campbell’s retail base is the Hannah Grimes Marketplace, and his portraits are sold through the Sturbridge Yankee Workshop. Those include images of iconic Americans including George and Martha Washington and his favorite historical figure, Abraham Lincoln. “I love that face,” he said. “The man was a genius.”
But his hands-down muse is a 12-year-old Jack Russell terrier, Otis – named for the town dipsomaniac on the Andy Griffith Show.
“Otis is the love of my life,” Campbell said. “I met him before his eyes were even open.”
Otis not only appears in much of Campbell’s work – he does one Otis portrait a year – but also does some paw paintings of his own. The dog’s name appears in the artist’s oeuvre. Campbell’s Sito Seed series (Sito is Otis spelled backwards) is a series of paintings inspired by Americana in the form of vintage seed packages, which were mini, intricate artworks in themselves. His versions are delightful, colorful images of vegetables taking human form – including the radish lady with a bulbous, magenta body and a jaunty fascinator hat with green leaves as embellishments; a distinguished pea pod gent with a top hat and tendril arms; and an Elizabethan lettuce lady with a leafy ruffled collar. 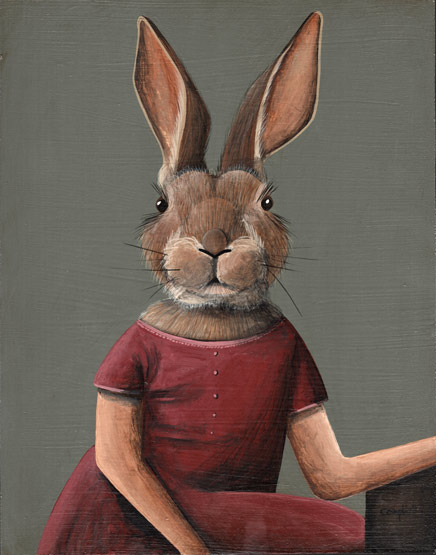 Otis isn’t the only animal to inspire the artist. They appear every

where, oozing personality and earnest expressions. “Pig,” which appears on this issue’s front cover, is part of Campbell’s “animal selfies” collection. He’s created a whole series of anthropomorphized creatures such as Regina Rabbit, wearing a prim maroon frock; Foster Fox, dapper in a Victorian ensemble; Delbert Deer in a sailor suit; a crow wearing black boots; and of course, “Otis Van Gogh” – his beloved Jack Russel rendered as the artist’s famous self-portrait with one floppy ear missing.
While Campbell willingly takes on custom commissions, he’s also open to rendering new subjects in his signature style. He recently finished a haunted New England map requested by a local psychic. He’s also working on a series of pictorial labels for a candle company, and there’s even some Tim Campbell jigsaw puzzles and archangel prayer kits on sale with some of his other art, including a portrait of a confident-looking Lizzie Borden leaning on a chair.

In addition to the Hannah Grimes Marketplace, 42 Main St., Keene, Campbell’s work is available at. He can be reached at 603-352-3771 or tcampbellart@gmail.com.