By Stacy Milbouer Fiddlehead Contributing Editor
All photos courtesy of The Melamine Cup.

The whole concept of Third Place – a space that is not home, not work but rather a community gathering spot – has been turned on its head these days. But at the Melamine Cup in Jaffrey, owner Kari Lindstrom, has found a way to keep the third place concept and her small retail business going.
The shop is home to all things nostalgic and mid-century, from the eponymous pastel, plastic dishware to pink Barbie cases and “Bananas in Pajamas” plush doll from the 1990s.
A walk through the shop when it was open to the public full time – and not just on Saturdays for several hours – was like walking through your own childhood. And thanks to Lindstrom’s weekly live Facebook broadcasts, that experience is still possible.
Early in the spring Lindstrom began broadcasts live from the shop with her bestie, Velvet Brown, working Lindstrom’s smartphone video camera and reading the messages that come fast and furious from those watching from home.
The “show” airs on Facebook Live Wednesday nights from 7 to 7:30 p.m. And while Lindstrom holds up selected items that viewers can buy by messaging the shop’s Facebook site (she responds to the messages in the order in which they’re sent), it feels more like a BFF shopping night out.
“It’s still evolving,” Lindstrom said. “I’m still wildly nervous.”
This ain’t no QVC with slick sets, coiffed hostesses and hard sells. Lindstrom jokes that “it’s more like ‘Wayne’s World.’”
The internet at the shop goes in and out. Sometimes the camera angles are tippy and the sound glitches once in a while, but that just adds to the charm.
One watcher commented, “even your technology is vintage,” followed by a smiley face emoji.
But Lindstrom’s sincerity and warmth are working. Each week the videos average 1,700 viewers.
Lindstrom and Brown open their show with a vinyl LP placed on a 1970s restored stereo with walnut Advent speakers. One week it was a few seconds off Rick Springfield’s 1983 “Living in Oz” album, another week Madonna belted out “Holiday.”
It feels like an intimate party more than a sales vehicle. Lindstrom and Brown toast each other with a signature mixed drink. It helps that Brown, aka “the cocktail guru,” works for a liquor store and creates eye-catching adult beverages like the springy lemon drop martini featured on a recent show. The friends talk through the recipe for the cocktail.
After that, it’s show time. Like Lindstrom said in her first broadcast, “I’m doing a fun vintage improv, and I’ll also show you things in the store.”
Lindstrom is likely to be wearing her favorite Stranger Things sweatshirt and jeans. She stands amidst, well, lots and lots of stuff with vintage posters of a suspender-wearing Robin Williams as Mork; Michael J. Fox circa “Family Ties;” and Kevin Bacon in his “Footloose” days as back drop.
She digs through a nearby pile and holds up an item to Brown’s lens. And for the most part, these are not items with big price tags, but they do have huge nostalgia value.
On a recent show she presented a vintage Cooties game in mint shape on sale for $10. One of the online viewers texted, “you need a cooties’ shot” to play. “Unfortunately, I have a bad case of the cooties. I’ve been in the house too long. I have kid cooties right now,” she said. 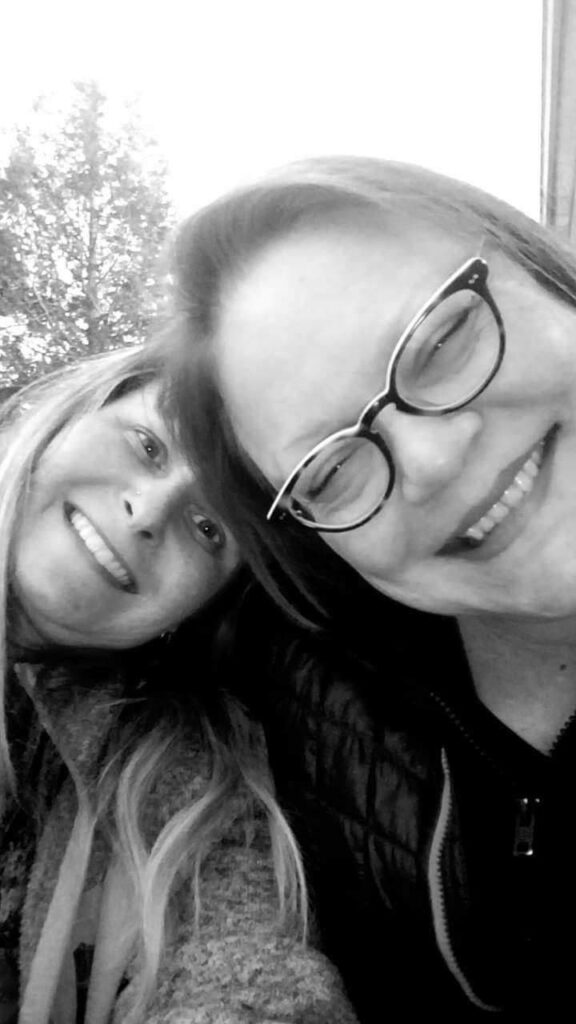 Other selections included a Grizzly Adams lunchbox avec thermos, $45; a pair of Strawberry Shortcake shakers from the 1980s for $10; and also for a “tenner,” a box of aluminum foil from the 1950s with stylized graphics of cows, chickens and other farm animals on the box, which is “perfect for a vintage diner or movie set,” Lindstrom said.
Occasionally there’s something a little more pricey, like the white Herman Miller molded chair, a steal at $125 – still a fraction of the price it goes for online.
Comments and little red hearts are constantly popping up on the Facebook screen while Lindstrom does her live presentation. At one point she told her audience that she tasked her assistant to find the ugliest piece of “Avon-o-bilia” in the store.
“I have a lot of Avon,” she said to her remote audience. “Some of it is beautiful, and I put it out at the store, but some of it, like this, is just so ugly.”
With that she holds up what looks like a black ceramic lamp with plastic daisies glued around the middle and a tiny lampshade with yellow stripes containing “Elusive” cologne.
“Should we smell it?” Lindstrom asks and answers in unison with Brown… “No.”
“Should we wear it? No.”
“Should we even open it ever? No.”
Lindstrom put a $5 price tag on the bottle, but one at-home shopper typed, “I’ll pay you five dollars to break it.”
Customers can have their purchased items mailed to them or can pick them up in front of the store on Saturdays from 10 a.m. to noon.
“This would be my incredibly busy season,” Lindstrom said. “But I’m considered a non-essential business, so I had to recreate myself. People kept talking about pivoting their businesses. We’ve been open seven years. I have to keep the business going so my dream will live on. Even though I’m still incredibly nervous doing these shows. I’ve never done anything like it before.”
And what about stock? It’s not like a store selling vintage items from decades past can just place an order for inventory.
“We have a lot of stuff in all our nooks and crannies that we’re bringing out,” Lindstrom said. “People are also dropping off items to us.”
One of those items recently dropped off was a mailbox in the shape of an open-mouthed fish.
“Everybody needs a fish mailbox,” she said.

You can sign on to the Wednesday night fun at facebook.com/themelaminecup.

Alphabet Book: Nashua in the Spotlight