Axe throwing isn’t just for lumberjacks anymore, and it’s not just something that happens in the woods. It offers an alternative for those who have grown bored with basketball, billiards and bowling.
“It’s an amazing release,” Tracey McCormick, owner of RelAxe Throwing in Manchester, said recently. “It’s particularly empowering for women.”
Axe throwing may be one of the world’s oldest sports, dating back into prehistory. It has recently become a fad in more urban environments in California and New York. McCormick said RelAxe is the only axe-throwing facility in New Hampshire.
McCormick said she enjoys introducing new participants to the sport.
“I love seeing newbies,” she said. “When they arrive, they seem nervous and a little afraid they might break things or get hurt, but as soon as they get started their attitude changes. It’s the physical release; you just feel better after throwing. And when they get a bullseye, there’s no stopping them.”
McCormick said she was introduced to the sport purely by accident about a year ago.
“When I tried it in Texas when I was on a family vacation,” she said. “I was hooked. When I got back, I was surprised that nobody was doing it in New Hampshire, so I thought why not?”
She opened RelAxe earlier this year. Participants heave modern versions of the prehistoric projectiles and 4-foot-square targets backed by wood in lanes that are fenced in, under the careful eyes of experts.
“It’s safety first,” McCormick said. “Coaches help you get started and make sure everybody stays safe. “
The axes range in weight from 1.25 to 3 pounds and come in a variety of shapes. 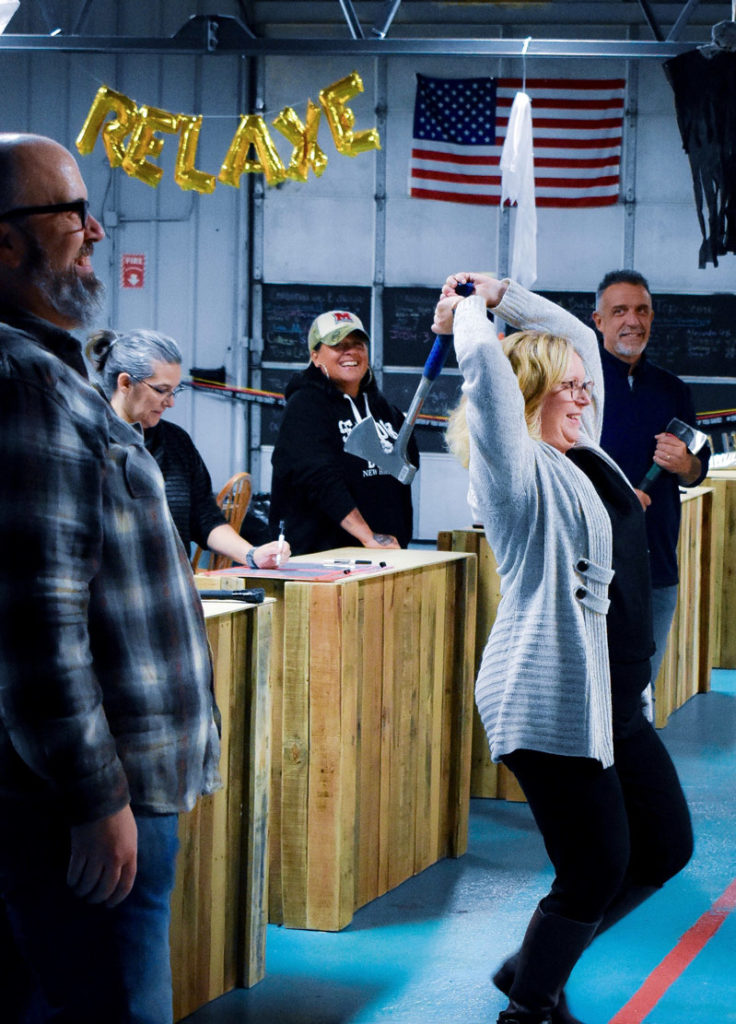 “Some people are naturals and get a bullseye right away and others like me take a long time,” McCormick said.
Celia Botto raved about the experience on the RelAxe Facebook page: “My husband, friend and I just got back from RelAxe Throwing. We thought we’d try something out of our comfort zone on our Saturday night. I am SO glad we did! We had the best time … Ten minutes in, I couldn’t believe how relaxed I was throwing an axe. Not only that, I wasn’t half bad!”
The facility hosts sports leagues, bachelor and bachelorette and even divorce parties. “We’ve had people who wanted to put the picture of the spouses they were divorcing on the targets, but we don’t allow that,” McCormick said.
But axe throwing isn’t all about the act of splitting things apart. McCormick remembered one Father’s Day when a man brought his dad in.
“And they obviously were not close. They barely spoke to each other. A half-hour later they were smiling and laughing and talking. It was amazing to see.” McCormick said. “We have a blast. It is amazing. At night we have mood lights and we play music, like vintage George Thorogood and the Destroyers and AC/DC.”
The cost of axe-throwing is $25 per hour with discounts for parties of more than six and for league members, firefighters and teachers.
“We’ve had quite a few schoolteachers and administrators,” McCormick said. “When they come in you can definitely see that they are stressed. When they leave, they are not.
“People are always surprised by how much better they feel.”

CategoryGet Out!
Tagsactive active life axe fun get out things-to-do

Movies and So Much More at Red River Theatres