Story and photos By Will Lowenthal

It is believed potatoes were first planted in North America in 1719 by Scottish-Irish settlers in New Hampshire – Derry to be exact. In 2013, schoolchildren from Derry persuaded the New Hampshire Legislature to designate the potato the state’s vegetable.
Today, it’s good to know you can raise fun-to-grow potatoes in your home garden or even on your patio in the Granite State. We are talking about the so-called Irish potato, although they originated in prehistoric South America. They are in the Solanaceae (nightshade) family, which also includes crops such as tomatoes, peppers and eggplants. Unlike its relatives, however, the edible part of the potato plant is the tuber, which develops from underground stems called stolons. This contrasts to sweet potatoes (not discussed here), which are a member of the morning glory family, with “tubers” that are true roots.
Potatoes are a delicious and healthy food. A 5.3-ounce spud (one serving per the FDA) will provide four grams of protein, 26 grams of carbohydrates (including three grams of dietary fiber) and many vitamins and minerals, while containing almost no fat. Given their versatility, they can be prepared in many ways – some fried versions do not end up being healthy choices, but don’t blame the noble potato for that.
There are many potato varieties you can grow such as russets, white-fleshed and white-skinned, white-fleshed and red-skinned, yellow-fleshed, purple and fingerlings. In almost all cases, potatoes are grown from seed tubers, not true seeds. You can purchase seed potatoes at most garden centers, which allows you to choose the individual specimens you want, but your choices will probably be relatively limited. Purchasing seed potatoes from catalogs will give you more choices, but you’ll have to accept the specimens selected for you, and there are minimum quantity restrictions, which may be more than you need for small plantings.
One good choice for New Hampshire is the Kennebec. This is a late-maturing white potato, with excellent taste and good storage potential. Under certain conditions it is subject to scab, a cosmetic defect caused by certain bacteria, but that does not generally affect its eating quality. 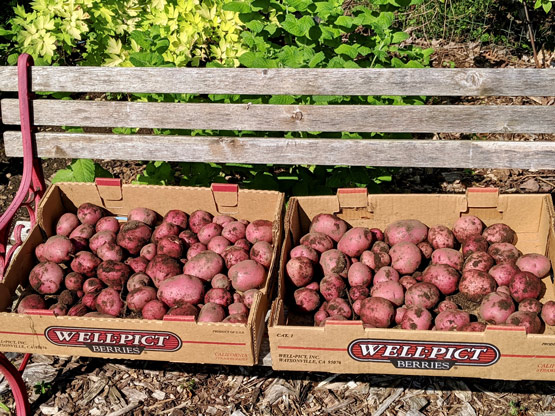 Another good choice is the early-maturing Red Norland. This also has excellent taste and is not typically susceptible to scab, but the yield is lower, and it does not store as long.
All seed potatoes sold by suppliers come from lots that have been inspected and certified disease-free. You should not attempt to grow potatoes you saved from last year’s crop, as the potential for disease increases.
You can cut large seed potatoes into halves or quarters, if each piece has at least two or three eyes. Small potatoes can be planted outright, and have less risk of rotting, if they have the right number of eyes.
A good guide to the quantity you should purchase is 15 pounds of seed potatoes per 100 feet of row. Each small potato or piece makes a plant, which should yield three to five pounds of spuds for you to enjoy. Of course, nothing in gardening is guaranteed.
Success in growing potatoes, like any other plant, begins with the right soil conditions. It is always recommended to get a soil test, specifying in the request that you are growing potatoes. An acidic soil (pH 5.4) is best for potatoes, but this is not ideal for other crops. Slightly acidic soils (pH 6.0 – 6.5) will work and will be more compatible with other crops, but scab-susceptible potato varieties are at higher risk for the disease at these higher pH levels. Stone-free, well-drained soils produce the best tubers. Because potatoes are in the nightshade family, subject to many of the same diseases as tomatoes (such as blight), it’s best to wait three years before re-planting any member of the family in the same spot. Your soil test will also give the proper fertilizer requirements, both at initial planting and during the growing season.
In deciding when to plant, the soil temperature should be above 45℉. In New Hampshire, this can be late April or early May. If you are planting in rows, excavate a trench about six inches deep, piling up the soil on both sides of the trench. Leave at least 30 inches between rows. Place the seed tubers about a foot apart in the trench and cover with a few inches of soil from the sides.
Keep the ground well-watered, equivalent to one inch of water per week. When the plants have emerged and grown to about eight inches high, partially cover them with soil from the sides. Hill them up like this several more times during the growing season. This will allow the tubers to form along the stem, and will keep them from getting exposed to light, which will result in greening of the skins. The green parts will be unpalatable or even slightly toxic; they can be cut away, if present.
If you don’t have enough garden space to grow in rows, you can grow potatoes in containers on a sunny patio or deck. Three or four seed potato pieces can be planted in a 15-gallon container or “grow bag” sold for this purpose. Fill the container part way with a good quality soil, place the pieces three or four inches deep, and as the stems emerge and grow, add more soil two or three times.
Be on the lookout for insect pests. The chief culprit is the Colorado potato beetle, which is about three-eighths of an inch long, chunky and boldly striped with yellow and black. They and their larvae can quickly chew through the leaves of the plant. Pick them off and drop into soapy water to drown them. If all else fails, you can spray with organic pesticides containing Neem or Spinosad. Always follow the label’s directions. A lesser pest in our area is the pale-striped flea beetle. This resembles the Colorado potato beetle, but it is smaller and thinner. Again, hand-picking is best.
Your plants will grow all summer and send up flowers. When the foliage starts to die back, stop watering. Sometime in September they should be ready to harvest. You can carefully loosen the soil with a pitchfork, and then complete the treasure hunt with your hands. If growing in a container, just dump the contents onto a tarp. Don’t try to brush the dirt off the potatoes yet. Spread them out to cure in a dark, ventilated place for two to three weeks. Curing will toughen the skins and help prevent early rotting. An old window screen works well for this. Potatoes store best at 40℉ with high humidity. Even if you are unable to achieve these perfect conditions, you can expect to enjoy three to six months of New Hampshire’s state vegetable.

The Older the Fiddle, the Sweeter the Tune