Lions, tigers and bears? Oh, my.
You’re probably not likely to find that terrifying trio in your backyard, but bear sightings have become more common, and, unlike Dorothy, the Scarecrow and Tin Man, 21st-century backyard naturalists with motion-activated cameras know exactly what’s out there and when.
Hamilton Stewart of Amherst has been recording the action in his backyard with a wildlife camera for 10 years.
“I’ve recorded a weasel, skunks and porcupines. I’ve recorded a lot of raccoons — every night about seven of them do a sweep across the yard — they’ve been doing it for years. And there’s a mouse on the stone wall almost every night.” 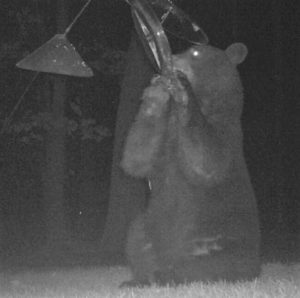 He said the most interesting thing he’s recorded was a bobcat that patrolled a stone wall in his backyard one night. Before he moved to Amherst three years ago, he lived in Hollis where he recorded a moose and flying squirrels.
“Wild creatures prefer — wisely — to avoid us, and since many are active after dark, animal sightings are frequently limited to a flash of fur or feathers in rapid retreat. But by using wildlife cameras, we can ‘see’ wild creatures at ease and learn more about their lives. It’s fun, fascinating and full of surprises,” according to the Appalachia Mountain Club (AMC) website, outdoors.org.
Wildlife photography has come a long way since the days of George Shiras III, who pioneered the use of nighttime flash photographs with crude tripwires to capture images of moose, deer, bobcats and other animals published in National Geographic Magazine in 1906.
Now, weatherproof wildlife cameras, also called trail or game cameras, are easily operated, battery-powered devices ranging from $60 to $400. The most basic combine a motion-activated digital camera with a wide-angle lens and a flash to capture images in daylight and dark.
AMC naturalists have placed wildlife cameras in remote areas near Greenleaf, Lonesome Lake and Zealand Falls huts in the White Mountains to study lynx and marten populations. AMC researchers also plot the growth of alpine plants with the cameras. New Hampshire Fish and Game conservation officers use them to enforce fishing and hunting regulations.
But they’re also a great way to see what’s going on in your own backyard. 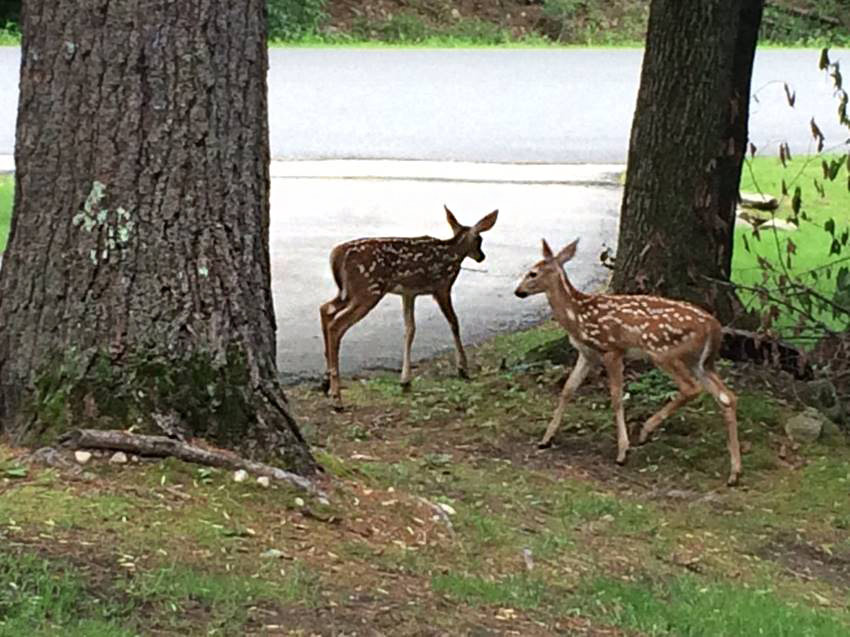 Stewart uses a Belkin Netcam. He has captured images of a pileated woodpecker, chickadees, titmice, cardinals and other birds.
He also has a camera he places in a birdhouse every spring. It’s a $10 webcam, like the kind used on a computer for video chatting, that he connects to his computer with a very long USB cable.
“I have a yard full of bluebirds,” he said.
Sometimes there is the thrill of the hunt. He fondly remembers the time he loaded for bear. After putting up his birdfeeder for the season in December he noticed that the feeder had been bent and emptied.
“I didn’t know if it was a bear, but I did know that they often follow a circuit when feeding, so I repositioned the camera and four nights later it returned at 8 p.m. and there were pretty good pictures of it on its rump picking the feeder clean. It eventually just strolled away,” he said.
The Belkin camera has a small SD memory card that may be removed and replaced or recorded over.
“I get about 300 or so pictures as well as 10 or so 30-second videos a month. I quickly pop through them and if I find something good, I move it off and save it,” he said. 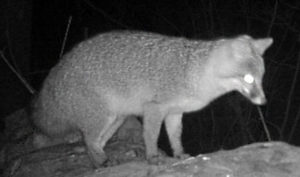 He said animals are active in the backyard no matter the season, although he pointed out, “It’s very quiet for a period after a snowstorm, but it doesn’t take long before they’re back on the hunt.”
And how has the camera changed his view of view of nature?
“I’m much more aware of the human-animal interface. Before I did this, I had no qualms about going into the backyard at night,” he said. “Now, I wouldn’t say I’m afraid or nervous, I just make a little more noise.
“And when I go around the house into the backyard I make a wide turn. I don’t want to find myself a few feet from the nose of a bear.”
He said there is another way he has been impacted.
“We would love to spray for ticks,” he said, “but now that I know all the animals that are out there that might be negatively affected, we don’t.”

Artist Paints What She Feels