So Many Books, So Little Time

“Books are everywhere; and always the same sense of adventure fills us. Second-hand books are wild books, homeless books; they have come together in vast flocks of variegated feather, and have a charm which the domesticated volumes of the library lack. Besides, in this random miscellaneous company we may rub against some complete stranger who will, with luck, turn into the best friend we have in the world.”
– Virginia Woolf

To many, happiness is a warm bookstore, and they don’t come much warmer than Henniker Book Farm, the oldest used bookstore in the state.
The Farm is a bibliophile’s dream. Shoppers are greeted at the door by the wagging tail of Toby, the bookstore doggie, a woodstove warms the body as well as the heart and comfy chairs are interspersed throughout the shop.
Handmade shelves contain a lovingly curated collection of contemporary and vintage volumes. It’s a mom-and-pop shop, owned and operated by Gary and Melinda McGrath.
“We want to be small enough and accessible enough so you can be there for 30 minutes and know where every subject is located,” Gary said recently. “And we do our best to keep it comfortable and uncluttered with wide aisles and no books piled up on the floor.”
Gary was formerly a biology professor at New England College, just a few miles down the road. Melinda is a former legal assistant.
While teaching at the school, Gary met Walter Robinson, a fellow professor who also owned and operated The Book Farm. Robinson opened the shop in 1964 in a former lumber storage building and gas station across the street from his home in Henniker. He built the bookcases himself from salvaged lumber.
“I don’t know how he did it,” Gary said. “He built all the bookcases with a claw hammer that had a ball-peen handle.”
The two struck up a friendship. “I hung out at the bookshop and helped out running the business and going on book buys. The most fun you have is buying books, the thrill of the hunt. You never know what you’re going to get,” he said.
The couple bought the store from Robinson in 2005. Robinson continued to help out at the shop until he was well into his 80s.
Gary dates his love of books back to his youth in California, where he was inspired by reading the newspaper columns of Herb Caen, essays by E.B. White and the novels of John Steinbeck. He remembered reading “In Dubious Battle,” Steinbeck’s 1936 novel about the travails of a union organizer, as a young man.
“It was the first book I ever read that told me there was a life outside the regular concerns of a 12-year-old,” he said.
He said E.B. White is still a favorite, as is anything written by humorous travel writer Bill Bryson. “People are surprised that a biology professor has a love of literature, but it’s not unusual. You’d be surprised,” he said.
Owning a used bookstore means a lot of surprises, one coincidently, involved E.B. White.
“A lot of people think we find money in books, but we never have. I think the place you really find money is in women’s shoes,” Gary said. “But we have come across some interesting things including signed copies of Robert Frost poems, and one inscribed by Walt Whitman. But we’re really not that kind of a bookstore. We concentrate on carefully chosen books in great shape.” 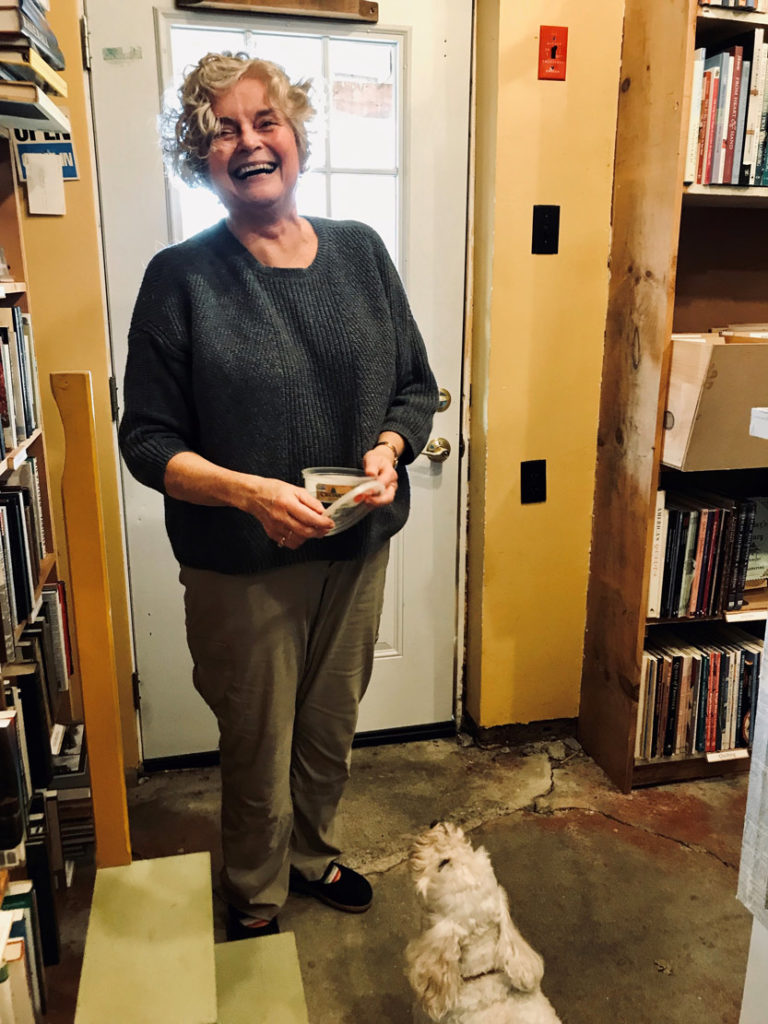 Melinda McGrath is helped
by Toby the store dog.

But there is one book Gary said he would never sell. It’s a copy of E.B. White’s 1942 collection of essays about life on a Maine farm called “One Man’s Meat.”
It’s not that the book is so rare. It’s what was inside that made it so special to the bookseller.
In the copy of this book, Gary found two letters. One was from a serviceman who had fought in World War II and the other was from the famous writer, E.B. White, living in North Brooklin, Maine, to the young lieutenant.
The lieutenant had written a note to White, then in his mid-40s, during the war telling him how much he enjoyed the book “and the kind of world the writer created and the people in it.” The kind of people, the lieutenant said, that the war was “being fought to protect.”
White’s letter said he was “awfully glad” to receive the letter about his book.
“I do little enough for the war,” he wrote. And continued that at least it gave “a little pleasure to somebody who is.”
He closed by thanking the lieutenant for writing and added, “I’ll try to see that America is here for you when you get back.”
That America would include books like “Charlotte’s Web” and the “Trumpet of the Swan” – among the volumes he wrote after the war.
That book is just one of about 30,000 volumes across all subject areas in the shop.
If you don’t find the book you’re looking for, just ask.
“My head is filled with the titles of books, the ones we sold, the ones we looked at the ones in the shop. But I can usually point browsers in the right direction,” he said. “A lot of people think it’s magic when we can go pull one out, but most of our books are shelved in alphabetical order, biographies, of course, by subject. It’s not unlike being a worker in at a grocery store. Nobody is surprised when they can tell you canned peas are in aisle four.”
Gary said the majority of their books are sold via the internet. Last year he sold 3,700 books online and about half that over the counter, from January through November.
“On our best day we shipped 25 books to Arkansas, Connecticut, California, New Mexico and Munich, Germany,” he said.
He said you never know what book would sell, but some are predictable.
“When the Cathedral of Notre Dame burned down, we sold every book we had by Victor Hugo.”

Sweets for Your Sweetie