Story and photos by Tom Long and Stacy Milbouer

The sheet of ice at the Nashua Country Club may be the cleanest in the state. It’s devoted to curling, the sport in which players slide a granite stone toward a target, guided by sweeping brooms to help it along its way.
Curling began in Scotland (which is known for its stellar granite quarries) in the 16th century and is sometimes called “chess on ice.” The sport disappeared from the Winter Olympic Games in 1924, but was reintroduced 22 years ago, causing a renewed interest in the sport in New Hampshire and throughout the country.
There are currently more than 20,000 members of the United States Curling Association — up from 10,000 in 2003.
On a recent evening about 30 members of the Merrimack Valley Curling Club participated in a clinic held by officials from the Grand National Curling Club at the Nashua Country Club. Curlers in fleece, stocking caps and other warm clothing watched as an official demonstrated the correct method to send the stone on its way, and used a broom to maintain her balance while sliding along the ice before she released it.
The brightly lit, barn-sized facility is in an outbuilding at the country club with a vaulted ceiling. The curling surface, or “sheet” as it called by aficionados, is about the size of a hockey rink and has four targets of concentric rings at both ends, which allows four games to be played simultaneously.
While the clinic was conducted, a handful of members in Merrimack Valley Curling Club jackets sipped drinks, crunched crudité and chatted in the facility’s warm room. 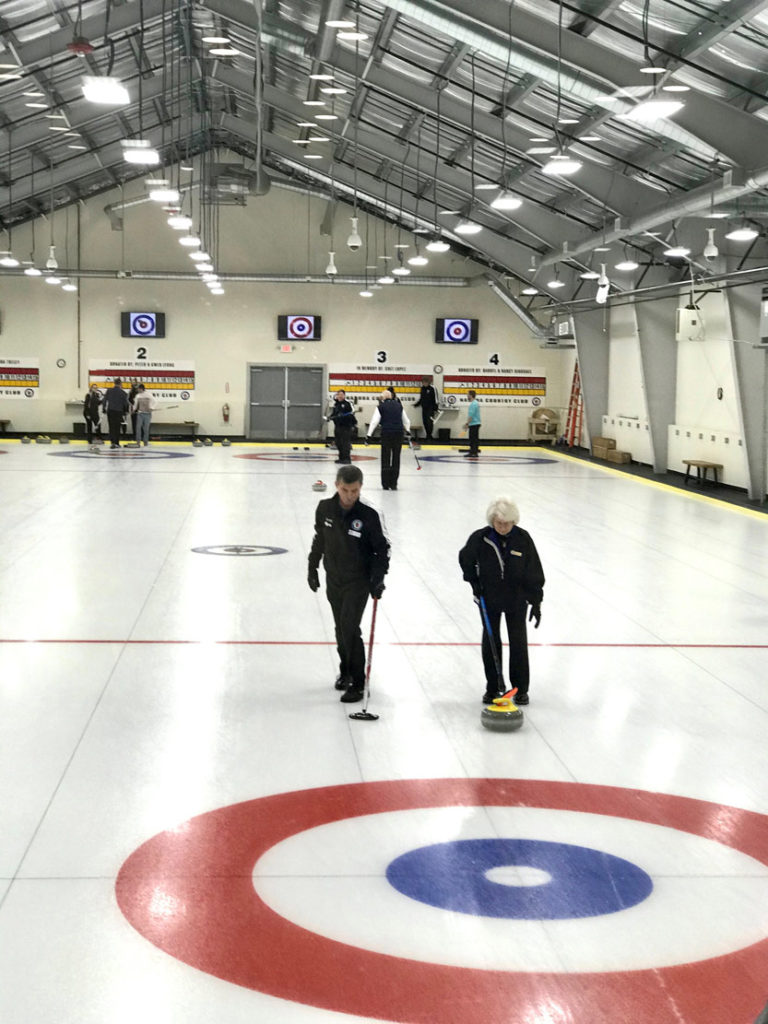 “We’re primarily a social club,” Merrimack Valley Curling Club President Joe Lessard said while overlooking the ice.
Members range from newbies to experienced players, “with the single intent to have fun and enjoy the spirit of curling.”
Lessard said he first became interested in the sport 10 years ago.
“I saw it when the Winter Olympics were on TV and thought I’d give it a try,” he said. “It’s a friendly sport. I enjoy the social aspect, maybe play a game and have a drink after and socialize with other members.”
The club has 92 members.
“They range in age from their mid-20s to 70s,” he said. “You don’t need any particular physical attributes. What’s important is the mechanics, balance, concentration and consistency.”
Lessard said the club was founded 20 years ago by Leo Lambert. It has sessions on Sunday and Tuesday evenings, and visitors are welcome.
The organization rents the ice from the country club, where curling has been held since 1928, when games were played outside on a pond — now the ninth hole at the club’s golf course. The games moved inside in the 1940s.
Curling is a sport related to bowling or shuffleboard, in which 40-pound granite stones or “rocks” with handles are slid toward a target with four concentric circles — the “house,” indicating different scores, situated on opposite ends of the “sheet.”
Each team has four players and eight rocks. Those players take turns sliding the rock toward the house. The stones closest to the center of the target after all the rocks are slid score points.
The thrower can induce a curved path, described as a curl, by causing the stone to slowly turn as it slides. After the stone is sent, its trajectory is influenced by two sweepers with brooms moving ahead of the stone, causing it to travel farther, decrease the amount of curl or clear ice debris from its path.
Not much equipment is needed to play; just a pair of shoes dedicated to the sport and a broom. Curling shoes are similar to any athletic shoes, but they each have special soles: the “slider” designed for sliding and the “gripper” for the foot that kicks off. The club does have some shoe covers that allow rookies to try their hand at the sport. 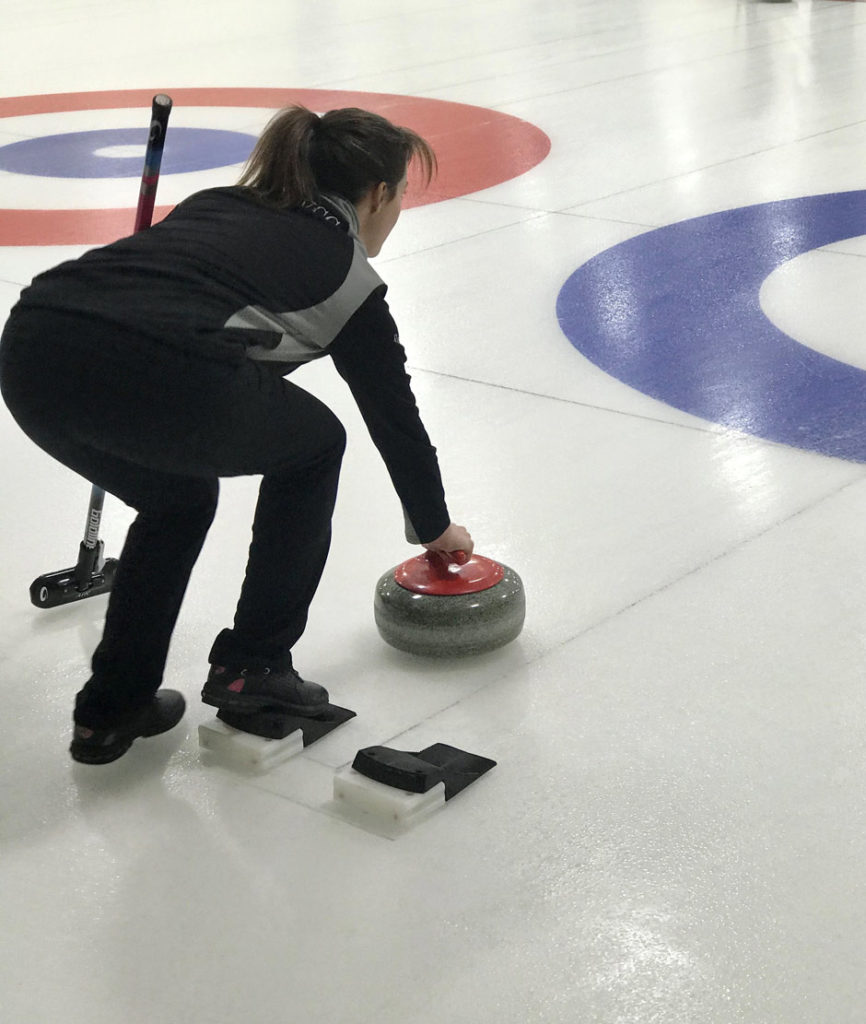 Rachel Peary has been curling for four years.

“A broom costs anywhere from $80 to $300, though you could go crazy and spend as much as $3,000,” Lessard said.
Curling is one of the oldest organized team sports. It may have reached its widest audience when The Beatles participated in a game in their 1969 film, “Help!” The villains turn one of the curling stones into an improvised explosive device. George Harrison uncovers the “fiendish thingy,” tells everyone to run and the lovable mop tops avoid the explosion that leaves a hole in the ice.
“You should try.” That offer to a spectator came from Rachel Peary, a member of the Merrimack Valley Curling Club. Peary has been curling for four years and thinks everyone should join in.
“It’s so much fun, it’s a team sport and we include everybody,” she said.
Sure enough, one look at the ice and there are players young and older, some in wheelchairs. Some who have held leadership positions in the Grand National Curling Club and some who had never seen a curling stone up close until recently.
“If you have a bad back or just can’t bend down, we have push sticks, a long pole that allows participants to push the rock from a standing position,” said Peary.
And according to the club’s website, its “doors are open to new members and welcome anyone with a desire and passion to help grow the sport.” In addition to an open house prior to the season for those interested in joining a curling club, all are invited to drop in and visit on Sundays from 4 to 9 p.m. or Tuesdays from 8:30 to 10 p.m. when members gather on the ice.
Yes, it’s about this offbeat sport, but it’s also about community.
There’s the warming room with drinks and munchies and, said Peary, there’s “broom sticking.” That’s when after a game or bonspiel (tournament) the winning team buys the losing team a drink.

First in the Nation

Badger Spells Business with a Certified B