The Beauty of Birth

Story and photos By Carole Soule

In March and April, it’s raining calves here at Miles Smith Farm. At least that’s what it feels like when each season 15 to 20 calves join our herd of Scottish Highlanders. Sometimes it’s easy, and sometimes it’s a struggle.
When birth is imminent, expectant mothers are kept in the barn, so we can keep an eye on them. But it’s hard to know just when to confine them.
A cow’s udder will swell a few days before, but the birthing vigil starts when the cow’s water breaks. Sometimes the water breaks, and the calf appears within minutes. Other times the wait is much longer, but still, the farmer has to be alert day or night, whether it’s clear or stormy, whether she’s well rested or exhausted.
As human parents have often thought it would be wonderful if births could be scheduled. Feed hay at 9 a.m., turn out the horses at 10, deliver a calf at 11:30.
According to the online newsletter, “On Pasture,” (onpasture.com) it is possible to time the birth. Feed the cow in the morning, and the calf will be born at night. Feed her at night, and the calf arrives in daylight.
Have my cows known this all along and didn’t tell me? With nothing to lose, I’m going to try this system. Daytime vigils are more enjoyable than the nighttime version.
When she is ready, a pregnant cow will look for a quiet place to give birth— away from the herd. After the birth, the mom hides her calf, keeping it safe from predators.
Hunting for a hidden calf is like trying to find Waldo and, unless you’re 10 years old, it’s difficult and frustrating. I’ve walked within a few feet of a sleeping calf and not seen it. That’s a reason for keeping mom in the barn.
Another reason calving can be dangerous: Typical cow labor is 15 to 30 minutes; when it goes longer, there might be trouble. 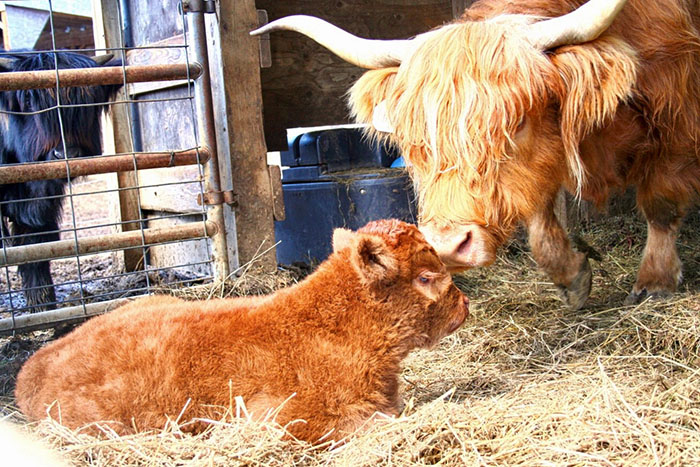 Missy, a red, 10-year-old Scottish Highlander, was in labor for more than an hour, and I feared the worst. I coated my arm with Vaseline and gently reached into her birth canal to check the position of the calf.
Sometimes a leg is bent backward, or the head is twisted so that the calf is stuck. And that can be fatal. This time, though, the head, facing forward on top of two little hooves, was perfectly placed. As I felt his face, the unborn calf sucked on my fingers. He was alive!
Farm equipment might break, and the mortgage might be due, but nothing can take away that feeling of joy. The little guy just needed some help.
Since the calf was positioned correctly, I fastened a rope around each hoof, then pulled with Missy’s contractions. Within minutes, the calf slithered to the ground, tongue hanging out — and breathing.
The newborn calf’s rear legs stretched out behind him as he lifted his front legs.
For three seconds he stood, all four legs wobbling, then tumbled to the ground, head first. Missy hovered over the little creature, licking his wet body. Steam rose from the calf while his mother dried him with her tongue, mooing soft encouragement.
Only an hour later he had mastered the art of standing and found the breakfast buffet of his mother’s teats. He nursed while she continued licking him, encouraging him to fill up.
I’m amazed every time to see a new life arrive equipped with the instincts needed for survival. Then I just stand back in awe of the miracle of birth, sure that farming was the right choice for me, greasy arm and all.

Carole Soule is co-owner of Miles Smith Farm, where she raises and sells pastured pork, lamb, eggs and grass-fed beef. She can be reached at cas@milessmithfarm.com.