Vegetarian at the Table?

Quick and Easy Meatless Entrees for the Holidays

story and Photos By Marc Bouchard

It’s the holidays, and the entire family is gathering at your house. Some people you’re really looking forward to seeing, and a few who are only there because the crying and begging had become intolerable.
But you’ve decided to put your best foot forward, and to ensure success you’ve planned a feast to which Bacchus, Falstaff and even Orson Welles would raise their glasses: turkeys, duck, goose, prime rib, scallops wrapped in bacon, sausage stuffing and for dessert, steamed suet pudding.
And then someone, probably your son from the city, sidles on over and whispers, “Hey, did I mention Lucretia (the woman dressed entirely in black standing in the corner, the latest in a long line of amours) is vegetarian/vegan and maybe gluten-intolerant?”
“No,” you respond, which isn’t surprising, since until an hour ago you didn’t know that she even existed.
“Please,” says your son. “Is there anything she can eat?”
Luckily you planned for exactly this situation. Because tucked away on your menu, in between the carnivore’s delights, are vegetable side dishes that can be transformed into vegetarian-friendly entrees in just minutes.
And the best news is that you can prepare them a day or two before the grand event, leaving you more time to find out what Lucretia’s intentions toward your son are. You get what you want, they get what they want and everyone is happy.
The Fungus Among Us
The magic that you are about to execute is based on a sleight-of-hand used by home cooks and professional chefs since the beginning of time: Take something good, and then repackage it into another form. But it only works if the original components are worthy.
Mushrooms cast a spell over those who love good food. Not a vegetable, but a fungus, or rather the fruit of a fungus, they bring a wealth of flavor, a unique earthiness and an abundance of healthful nutrients that few foods can match. (See sidebar for more details about a superfood called Lion’s Mane.) 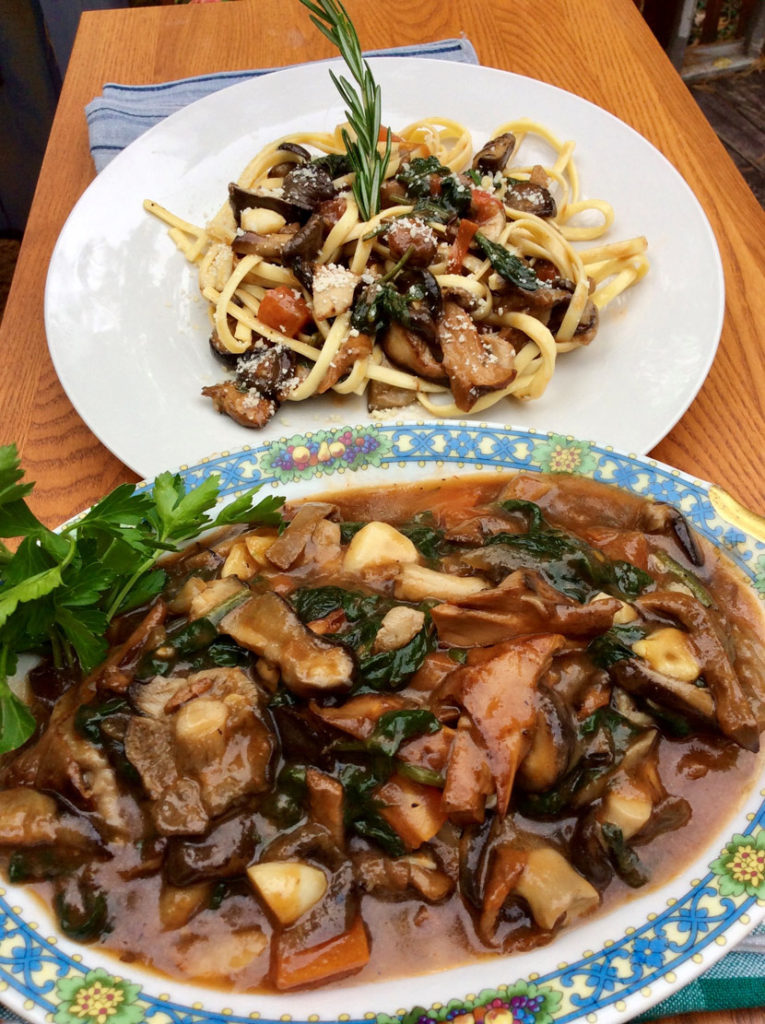 d,d
And they pair nicely with roasted meats, which makes them great for Thanksgiving and Christmas.
Years ago, white mushrooms dominated the marketplace. Today, every store has at least cremini, baby bellas, portobellos and shiitakes on their shelves. And dried mushrooms like porcini are more common, too. Use a mix of these for more flavor and complexity.
The secret to great mushrooms is to sauté them in small batches before adding the seasonings. This evaporates any excess water, thus intensifying their aroma.
To transform this side dish into a full dinner all you need is some dried pasta and a pot of boiling water. Grated parmesan and a pat of butter are optional.
Sufferin’ Succotash
I blame Clarence Birdseye for the disappearance of succotash from the holiday table.
This dish’s origins go back to the time of the Narraganset Indians who taught early New England colonists how to grow the legendary “Three Sisters” (corn, squash, beans), then mix them together in a colorful stew.
For centuries they were a regular dinner staple throughout the country. Then Birdseye started selling frozen corn and lima beans, and it’s never been the same.
The truth about succotash is that it’s extremely easy to make, contains tons of flavor and nutrients and can be tailored to suit every region and family’s tastes. Like it spicy? Make a Southwestern version with hot peppers and chili powder.
Live up north? Add one or more winter squashes. Live down south? Don’t forget some okra and black-eyed peas. And so on.
The basic recipe is the New Orleans “holy trinity” of celery, onions and bell peppers, with corn and beans added. Avoid the temptation to add everything in your cupboard, lest it become a mish-mash. And while most recipes call for lima beans, the truth is that a lot of people (especially kids) loath big, fat beans. So, I opt for garbanzos. Other than that, there’s few seasonings, allowing the true flavors to come through.
To transform this simple stew into a dinner entrée, we will bake it in a light pastry shell. You can use any homemade pie dough, but I like to keep a package of pre-made shells in my freezer for exactly this kind of emergency.
I can roll them out and fill them in two minutes, and within half an hour they’re ready to be devoured. Gluten-free pie shells are also available in the frozen food section of most supermarkets (see sidebar for more information).