New Displays Celebrate the Heart of the Home Front

Don’t be fooled by the iconic tank crashing through the wall of the Wright Museum of World War II.
There are more than 14,000 items in the collection, including fully operational military vehicles, as well as displays about battles and first-hand accounts from the people who fought them. But the museum is not just dedicated to the heroics overseas. Just as importantly, it provides an eye-opening and thoughtful journey through the home front, showing how Americans of all ages came together and focused on doing what needed to be done to win the war – a subject that has special resonance in recent days.
Since 1994, nearly 300,000 visitors have walked back into time to experience the music, the fads, the fears and the innovative ways the country, communities and individual families coped with the war. This year, the museum offers new exhibits to mark the 75th anniversary of its end.
“We say, ‘Experience the past and be inspired by a nation united,” said Executive Director Michael Culver. “That’s what this museum is about – the home front and what Americans did to enable the military to win the war. So, everything they see here is little kids doing their part, movie stars going to war, people just doing everything.”
Since an in-person trip to the museum is not possible right now due to COVID-19-related closings, there is a virtual, 360-degree tour that takes you through the halls and allows the viewer to “walk” through the museum from home at wrightmuseum.org.
Once the museum reopens to the public, visitors will see mockups of a typical 1940s living room, complete with a vintage radio that probably carried F.D.R.’s reassuring Fireside Chats. There’s a kid’s wagon full of scrap metal that would have been collected and sent away to help the war effort. There’s a malt shop and a kitchen full of utensils your grandmother or great-grandmother used.
There’s also the Time Tunnel, with exhibits from 1939 to 1945 that highlight the music, the movies, the magazines, the fashions, the news and ordinary people who did extraordinary things.
This year, the first thing visitors will see is a lobby display to memorialize the end of the war 75 years ago. Two other exhibits also will be dedicated to the anniversary.
Shaped by Conflict: Mementoes of the WWII era (May 1-June 24) includes items such as “trench art” and jewelry that servicemen made or bought overseas and sent home for their loved ones. Many of the items were worn at home by mothers, sisters or sweethearts as they followed news of the fighting. Trench art includes items servicemen made from war refuse such as shell casings, spent bullets of other war debris.
Memories of World War II (Oct. 4-31) is a collection of more than 100 Associated Press photos that depict the war, from the invasion of Poland in 1939 to the end of the war in 1945.
“It’s one of the best photo exhibits I have seen of the war,” Culver said.
The museum also will feature an exhibit of AP photos called Vietnam: The Real War (July 1-Sept. 27), as it continues offering education programs on topics not related to WWII. 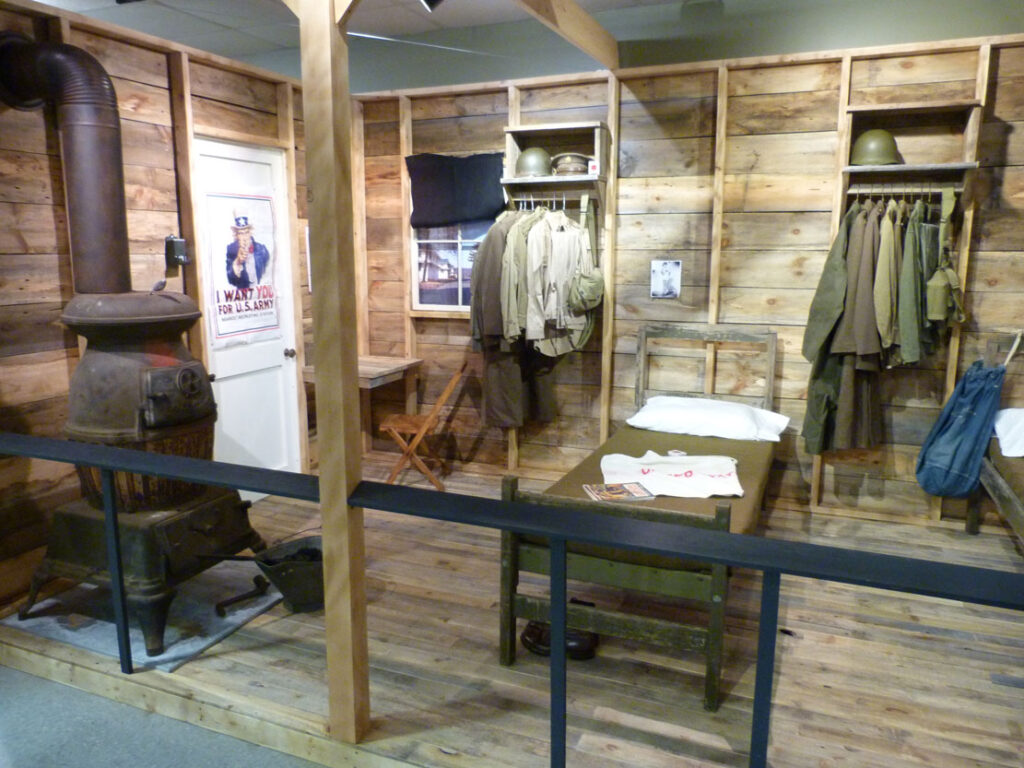 A mockup of a WWII Army barracks, complete with a pinup of Betty Grable and spit-shined boots under the bed.

In the off-season, the Wright Museum began a series of renovations called Project 25, celebrating its first 25 years and mapping out its next 25. More than 14,000 items in the collection represent the Home Front and the battlefield.
Renovations include lobby, theater and gift shop improvements, as well as a new John S. DuQuoin Education Center, supported by a donor in memory of DuQuoin, his uncle, who served in WWII. The center is twice the size of the current education center, which typically is jammed for weekly programs.
The Wright Museum was developed by the late David Wright, a Korean War veteran whose father fought in WWII. Wright experienced the Home Front growing up near Worcester, Mass. He owned and restored more than 50 WWII vehicles, but wanted to develop a museum to tell the story of what went on at home while the war raged around the world. Through its 14,000-item collection, special programs and student tours, Culver said the museum has carried on Wright’s legacy.
“I think he’d be happy,” Culver said. “We are here to bring in as many people as we can to see what he wanted them to see – the contributions, the sacrifices of the Greatest Generation – so that wouldn’t be forgotten. We can’t say enough thanks to him for all of that.”
David Wright, in an Associated Press interview in June 1994, as his museum was about to open, said, “One of my goals is for people to realize that the United States – if they get on the same bandwagon, everybody marches to the same tune – can do just about anything they want to do. You get things done by pulling together. I’m not going to get on a soapbox or have programs that preach it in those words, but subliminally they’ll get that message.”

For the Love of Plants